Thai TV Does Not Televise Revolution

Thousands of opponents of Thai Prime Minister Thaksin Shinawatra are holding a protest in Bangkok, vowing to stay in the streets until he steps down.

This is the latest in a series of rallies accusing Mr Thaksin of corruption and abuse of power. He has called a snap election in April in an attempt to win back authority.

But his attempt to regain the initiative has been thrown into doubt by the main opposition Democrat Party and two other parties, which have said they will boycott the election.

Thai television has been notorious for remaining silent when historic events are happening. Right now history is happening — a mob is marching on Government House with the intent to overthrow the Thaksin administration. What is Thai broadcast television showing? 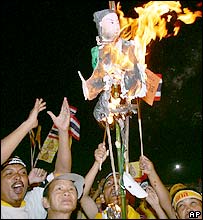