Stanislaw Lem died Monday in his native Poland, his secretary said. He was 84.

Lem was one of the most popular science fiction authors of recent decades to write in a language other than English, and his works were translated from Polish into more than 40 other languages. His books have sold 27 million copies.

His best-known work, Solaris, was adapted into films by Andrei Tarkovsky in 1972 and by Steven Soderbergh in 2002. The latter starred George Clooney and Natascha McElhone.

His first important novel, Hospital of the Transfiguration, was censored by communist authorities for eight years before its release in 1956 amid a thaw following the death of Josef Stalin. 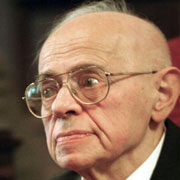 Totally tangential, but I was reminded of it:

in 1974, Philip K Dick began to inform on his sf colleagues, accusing them of being part of a Communist conspiracy — led by Stanislaw Lem, his great admirer — to kidnap him. Typically, although he mailed some of these letters to the FBI (they were ignored), he put others in a trashcan behind his house, assuming that whomever was watching him would deliver them… (one letter is preserved here)

(Also: “The honorary voting of Stanislaw Lem to membership is the sheep voting the wolf a place at the communal hearth,” Dick warned Science Fiction Writers of America members in ’75. “They certainly must be licking their chops back in Krakow right now.”)