How Did This Go So Wrong?

From one single BBC news report:

The New Orleans riverfront has been hit by a series of massive blasts, and fires are raging in the area.

The cause and extent of possible damage is not yet clear. The news comes as troops were sent to quell lawlessness in the city, where desperation grows.

Louisiana’s governor said 300 “battle-tested” National Guardsmen were being sent to the crippled city. “They have M-16s and are locked and loaded. These troops know how to shoot and kill and I expect they will,” Kathleen Blanco said.

The situation at the city’s convention centre, where up to 20,000 other residents sought refuge, was also said to be increasingly desperate. Families slept amid the filth and the dead.

“People were raped in the Superdome. People were killed in there. We had multiple riots.” – New Orleans police officer 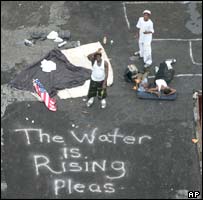