Despite complaints from 60 people, Britain’s advertising regulators said on Wednesday there is nothing inappropriate about the genitals of an animated frog whose high-pitched squeals are sold as a mobile phone ringtone. 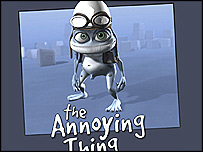 Television adverts of the motorcycle-riding Crazy Frog, who is drawn with a broad smile and a tiny penis, run frequently on British television, amusing, baffling and annoying viewers.

“While unusual for an animated model of this type to be shown with genitalia, no sexual or inappropriate references were made about its anatomy,” the UK’s Advertising Standards Authority said.

Twenty-two people complained they were worried children might see the advertising, which also promotes screen savers and mobile videos. Five parents said they were embarrassed by questions their children had asked.