A Sony Walkman, By God

My poor ancient Archos Jukebox FM Receiver is old and suffering now, and is being retired from the field and given pride of place as desktop storage. Which put me in the market for a new mp3 player.

Amazingly, I find myself once again in possession of a Sony Walkman. 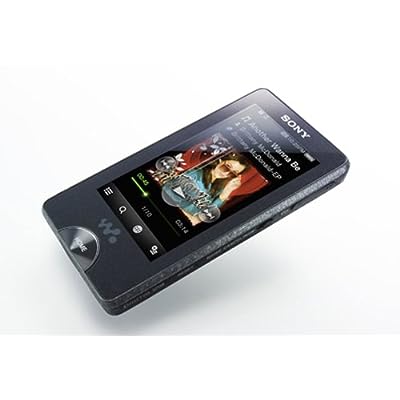 Of all the things to once again possess. I’ve just written something for The Wire music magazine about personal soundtracks, and the Sony Walkman is what started it. I don’t think, holding my original tape-playing Walkman in my hands, it even occurred to me that such a thing could or should hold a library of music and a day’s worth of TV shows. When I showed this tiny, heavy thing to Lili, I’m wondering now if she was thinking, "yeah, it plays music, but what else does it do?" She didn’t ask, but, knowing her, I wonder if that was going through her head. Whether that’s what goes through the heads of her Western generation, the third (?) internet generation. Where’s the controller? What else does it do?

Having only had the thing a few hours, I fat-fingered the slightly awkward mp3 slider bar while playing her a piece of music on it, watching her fingers twitching. A one-second slip, and she was in there, "give me that, old man," tapping the touchscreen (that she’s never used before). She’s the generation that listens to music on YouTube — and I was about to comment that she’s of the generation entirely used to overcompressed music, until I realised that I grew up listening to toppy medium-wave radio, where people specifically recorded for its quirks. Bass almost completely disappears in pop music until 1988, when it becomes a club and rave experience again. The Associates rigged an entire drum kit with nothing but snares so the sound popped on radio. The only real difference between YouTube and BBC Radio 1 is that she gets to search and choose exactly what she wants to listen to, circling outwards to associated links to find similar and new things. Control.

Clay Shirky’s line about how anything that ships without a mouse is broken — that’s her generation. (I still think he was just one foot behind the time — I understand he was working from an anecdote, but I can’t help thinking the word he should have used is "touchscreen.")

I found Lili crosslegged on her bed earlier, her guitar in her hands, earbuds in, watching something on her open laptop. I suspect it was either a guitar lesson, some tabs she’s been looking for, or listening to Theory Of A Dead Man and trying to detune her guitar to C-sharp to capture their tone. That’s how she treats the laptop — what else does it do? And the very conjuring of all those elements in the first line illustrates that her generation do not live with their heads in a laptop or a DS Lite or whatever. Less so, even, than the previous generation. It’s a fully integrated part of their lives, a Swiss army knife for the world. What else does it do?

If I tell her I have a YouTube app on the Sony Walkman I’ll never get the bloody thing back.

(I’m sure I was going to write about something else, but then I got off on a ramble. Oh well. File it under Brainjuice and move on.)

(Did I mention Lili won a Young Engineers award last week? She came home today with some weird mathematics award I don’t quite understand. I’m slightly afraid she’s going to operate on me in the night and I’ll wake up as a cyborg slave.)